We often hear about how the money in the Premier League gives even the mid-table sides more power than most, and it seems that played out for Brighton and Hove Albion this summer.

The Seagulls made six new signings this year, with Graham Potter looking to strengthen his squad and build for the future too.

One of those to arrive was defender Michal Karbownik, who signed in a £4.95m deal from Legia Warszawa before being loaned back to the Polish club.

His arrival was a late one, being completed at the end of the window, and by all accounts, it was a transfer that Brighton basically flexed their muscles to get done.

Earlier today we covered a report from Tuttomercatoweb that explained the player actually had a deal done with Napoli months ago, but it was never finalised.

Intermediary George Gardi confirmed as much to the site, with journalist Ciro Venerato adding that Brighton offered him three times as much in salary to convince to move to England.

Obviously, that worked, but it seems that Napoli weren’t the only ones who the Seagulls rolled over with their cash. 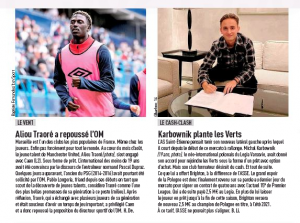 L’Equipe explain that Saint-Etienne believed Karbownik was going to be their new left-back this summer after the player agreed to join them on loan with an option to buy.

Legia Warszawa, though, wanted money ‘right away’ and that was something Brighton could offer.

So, Karbownik ‘went back on his word’ on deadline day and signed a four-year deal with them instead.

That saw Legia ‘immediately paid’ €2.5m, with a further €2.5m coming next summer as well. That was a transfer fee ASSE ‘could no longer compete’ with and so, like Napoli, they ended up missing out to the financial powerhouse that is Brighton.