Heavily relying on Neal Maupay for a lot of their goals in the Premier League, Brighton & Hove Albion are trying to lift some of the weight off the Frenchman’s shoulders by targeting a new goalscorer.

One of the names that has popped up recently is that of Boulaye Dia, currently at Stade de Reims in France.

The 23-year-old was in decent form for the Ligue 1 club last season, scoring eight goals and assisting another in 28 games in all competitions, which has caught the eye of a few clubs.

Brighton are one of them, accompanied by Marseille and Rennes, with La Provence having an article on the situation on Tuesday. 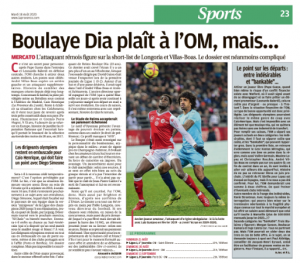 Capable of playing up front but also on the flanks, Dia is happy at Reims, and ‘doesn’t want to leave for the sake of leaving’.

He knows he’ll be playing in the Europa League with his club after they finished a surprising 5th last season, and is grateful for everything they’ve done for him.

His price has yet to be confirmed, but La Provence believe he will cost around €10m or so, which remains very affordable for a club of the Seagulls’ ilk.

Furthermore, the newspaper reveal Reims ‘would accept staggered payments’, which is a big bonus.