The Turkish Super Lig’s top scorer last season has yet to start a game for Aliou Cisse’s Senegal side but played his part with an impressive display against Benin during the quarterfinals earlier this week.

According to Fanatik, Brighton and Crystal Palace are using the competition to get a further lowdown on the player following claims this week both Premier League sides are in talks to sign him.

Galatasaray were hoping they could offload him to Middle Eastern clubs, however, Fanatik claim they’ve been unable to get a deal done with Saudi Arabian clubs.

It’s also reported the former Kasimpasa striker is keen to continue his career in Europe, but his wage demands are proving an issue. 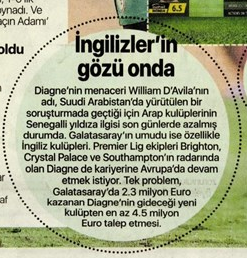 The Super Lig side are paying him €2.3m a season but the Senegalese striker is looking to get at least €4.5m from his next club.

It’s not reported if Brighton or Crystal Palace would meet his demands.

Diagne scored 31 goals last season in the league, and he’s under contract with Gala until June 2023.