The 20-year-old came up through the ranks of Barcelona’s youth system, and managed 10 goals and three assists for their B team in the 2019/20 season.

Mundo now claim the midfielder’s impressive campaign with the Barca B team can help him find his way into the first team for the Champions League clash against Napoli.

With Sergio Busquets and Arturo Vidal both suspended, and with Arthur’s complicated situation (already agreed transfer to Juventus), Monchu could be provided an opportunity to feature against the Naples club.

At the same time, the Spaniard’s agent is dealing with offers from elsewhere, and this is when the Seagulls and Eddie Howe’s side are mentioned.

Apart from Villarreal, Granada, Eibar and Sassuolo, he’s also attracting interest from England. It’s claimed Brighton and Bournemouth, who wanted to take Monchu in January, have gathered information about him. 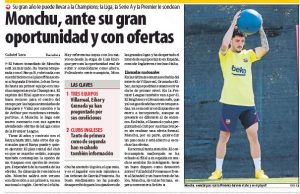 Barca’s initial plan was to let him go out on loan, but with the club’s need to raise funds, they are looking to sell Monchu and include a buyback option.

With clubs in Spain and Italy also wanting the midfielder, it remains to be seen if either Brighton or Bournemouth can overcome the competition, to acquire Monchu’s services.