Ajax are interested in signing Brighton and Hove Albion forward Alireza Jahanbakhsh this summer, and he would be keen on the move.

Jahanbakhsh joined Brighton in a £17.1m deal from AZ Alkmaar last summer but has endured a challenging first year in England, managing just ten appearances and two goals so far.

It’s been a disappointing campaign for him, and now Ajax are ready to bring it to an end and take him back to the Netherlands.

That’s according to De Telegraaf, who say the Dutch giants are yet to make their move for the forward but at ‘the signals are green’ for an attempt.

They explain that Jahanbakhsh was a target for Director of Football Marc Overmars two years ago, but at that time a transfer was impossible because of his asking price.

However, since then Ajax have ‘raised the salary ceiling’ and, because of Jahanbakhsh’s poor first year at Brighton, his asking price is now much lower than two years ago.

As such a move could now be on the cards and while Ajax are yet to approach Brighton or Jahanbakhsh’s management team, who also represent Maarten Stekelenburg, it’s believed the player would ‘welcome’ the move to Amsterdam. 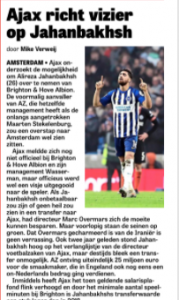 Any move from Ajax, though, will be heavily dependant on them selling other players first and whether they can qualify for the Champions League group stages.

They have already qualified for the tournament via their placement in the league but winning the Europa League would secure an automatic place in the Group Stages.

That, in turn, would see the millions ‘flow in’ to the club, providing them with the cash to make their move for Jahanbakhsh, with Brighton likely to try and recoup what they paid for him as a bare minimum in any move.