Brentford winger Ollie Watkins wants to join Besiktas in order to take the next step in his career, say Turkish newspaper Posta.

Besiktas have been linked with a move for the 23 year old in the past week and he’s reportedly on the shortlist of the Turkish club’s manager Abdullah Avci.

Posta claims both clubs have held transfer talks with regards to the former Exeter City player and Watkins reportedly wants to sign for Besiktas. It’s claimed the Brentford player is hoping an agreement can be reached for him to head to Istanbul.

According to Posta, there are also other Turkish clubs interested in signing Watkins, but the player has a preference to play for the Black Eagles. 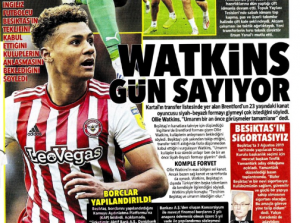 Besiktas manager Abdullah Avci is said to be a big fan of the player and wants to use him both as a winger and a striker if he joins the Super Lig club.

There have been claims Avci will make the final decision over whether the Brentford attacker is signed this summer.

Watkins is under contracted at Griffin Park until June 2021.