Two of Brentford’s best performers last year, Saïd Benrahma and Neal Maupay were heavily linked with a move to the Premier League this summer.

Of the pair, only the latter moved, swapping the Championship side for Brighton & Hove Albion, where he has already scored his first goal.

On the same day he was sold, Brentford brought in Bryan Mbeumo from Troyes to bolster their attack, and the 20-year-old also didn’t take long to acclimatise to his new surroundings, already scoring one and assisting another in his first five games.

Called up to France’s U21s for the international break, the winger sat down with L’Est Éclair to discuss his move and explain why, despite saying he wanted to stay in his home country, he decided to move to England. 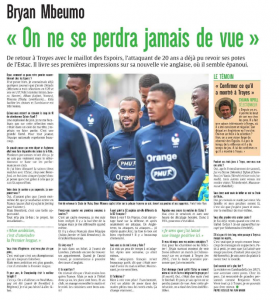 He said: “Brentford, it’s a nice opportunity. I liked everything over there: the project, the infrastructure… It’s true that it’s a league that makes you dream, but my ambition is greater, it’s to get to the Premier League.

“Is the Championship the best stepping stone for that? Yes. We’ve already seen Neal Maupay this summer. I didn’t hesitate to go there”.

With more and more players from France’s smaller clubs going this route, it isn’t surprising to see someone like Mbeumo giving it a try too.

After all, we all know the Championship is a great pool for newly promoted clubs to do their summer shopping, as well as already established Premier League ones plucking players with potential already settled in England, like the aforementioned Brighton.

If he has a good season like Benrahma did last year, there’s no reason why he couldn’t attract attention, and if Brentford can make a tidy profit on the £6m they paid for him this year, they probably won’t complain either.