With SC Braga striker Vitinha doing pretty well for the Portuguese side this season, it’s been common to see stories about his form and the impact it may have on his future.

A couple of months ago, it was claimed by the Italian media that Tottenham Hotspur and West Ham United were both ‘ready to battle’ for his signing, even though those rumours soon disappeared.

Now as we read the Portuguese media today, it turns out there’s another Premier League club being linked to the 21-year-old, and that’s Brentford.

Record learned that the Bees ‘also follow’ Vitinha ‘with particular attention’. It’s said they’re interested in the player along with Serie A side Fiorentina. 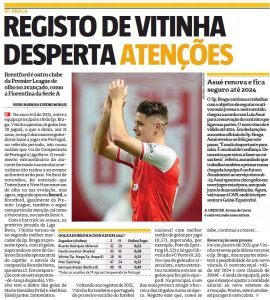 There’s no information on Brentford’s moves to sign Vitinha for now, with the newspaper only claiming they’re ‘keeping an eye’ on his potential.

Record writes that Vitinha last renewed his contract with Braga in January 2021, which means he still has a deal from the B squad. So he’s only protected by a release clause worth €30m, and despite the club’s wish to change the terms, that won’t happen so easily.