Already highly praised for his performance against Lokomotiv Moscow in the Europa League for Marseille, Mattéo Guendouzi continued his resurgence this weekend away from Arsenal.

Loaned with an option to buy believed to become compulsory if certain goals are met, the French midfielder is thriving under Jorge Sampaoli, once again displaying all his attributes against Rennes on Sunday in a 2-0 win.

Coming close to scoring his first goal of the season with a long range effort that nicked the top of the crossbar, the Arsenal loanee showcased tremendous vision and dynamism at the heart of the midfield, which has earned him rave praise for local newspaper La Provence.

Looking back at those who excelled and those who didn’t during the fixture, the outlet focus on Guendouzi. 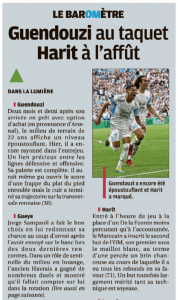 They point out that ever since his arrival, ‘the midfielder is playing at a breathtaking level’, pointing out he was ‘shining’ in his role.

Described as a ‘previous link between the defensive and attacking line’, he is seen as being the ‘complete package’.

It seems highly unlikely that Guendouzi will ever return to Arsenal, at least during the Mikel Arteta years, but if he does, it’s quite clear the player is benefitting from playing under Sampaoli, who has found himself the perfect dynamo at the heart of his team.