Some months ago, we’ve read several stories from the Brazilian press saying that some European clubs were keen on signing Éder Militão from São Paulo.

The player’s contract was about to end, which would put him in a situation where he could choose who to sign for.

However, Porto were quicker and reached an agreement with São Paulo to take him in July. Since then, the defender has been doing pretty well in Portugal.

Asked about the interest from Barcelona, Chelsea and Manchester United, the representative has claimed that there have been contacts, but only before the summer.

“All these clubs already had interest in Éder when he was at São Paulo,” Ulisses Jorge told O Jogo. “Since the player moved to FC Porto, nobody came to me.

“Éder is very calm, he is happy at FC Porto and he has no head to think of anything other than FC Porto.” 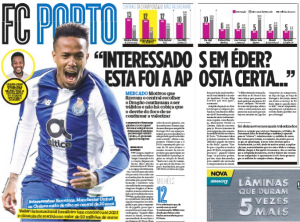 lisses Jorge also explained Porto made a great deal when taking Militão from São Paulo for so cheap, as he’ll end up being a bargain like Casemiro.

“When Eder was in Brazil, we had the opportunity to choose and we chose FC Porto. It’s a very strong club, one of the best to form players in Europe and champion of Portugal. It was with these premises that we decided and it is proved that it was the most correct decision.”

“Just look at the case of Casemiro, who left Sao Paulo, went to Real Madrid, left for FC Porto and became the player he is today; one of the best of Real Madrid and the Brazilian team. And with Éder I believe it will be the same.”