Home Europe Brahim Diaz and Real Madrid in disagreement – same problem as at...
SHARE
Ten months after leaving Manchester City, Brahim Diaz’s move to Real Madrid is yet to really get off the ground.
The Spanish midfielder swapped the Etihad for the Bernabeu in January of this year, with the La Liga giants paying £15m for the highly rated youngster.
He went on to make 11 appearances for Madrid before the end of last season, bagging a goal and two assists in his nine league games.
However, he is yet to appear for Madrid this season and, according to AS, had the opportunity to leave the club on loan this summer.
Zinedine Zidane made it clear that he loves the player but there are several ahead of him in the squad and thus, Madrid suggested he go out on loan.
Díaz rejected that suggestion, as he did when Manchester City suggested it, with it explained that he made the decision to stay at the alongside his father Sufiel, who is also his agent.
Having once been represented by Pere Guardiola, the player has since left the Manchester City manager’s brother.
They decided to stay at the Bernabeu and made it clear to Madrid that they would not contemplate leaving Madrid and believe their ‘time will come’ over the course of the season. 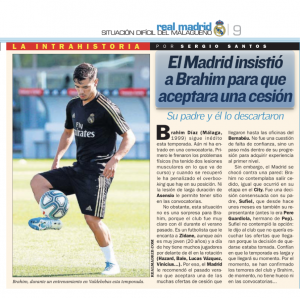 That’s yet to happen, with the 20-year-old yet to even appear in the squad list, never mind make an appearance, although he is not surprised by the situation.
It remains to be seen how long he is happy to sit and wait on the sidelines given he left Manchester City because he couldn’t break into the first team there.
Should Madrid’s current injury issues worsen and he not get his shot, it’s hard to imagine it’s a situation he’ll remain calm about long-term.