Bournemouth and Watford have both made enquiries for Stade de Reims left-back Hassane Kamara.

Kamara has been in impressive form for the French side this season, helping them to tenth in Ligue 1 so far.

His performances have earned him plenty of attention, with clubs in France and England both having shown interest in his signature.

Yesterday we covered a report from Foot Mercato that stated Brighton and Crystal Palace were both keen, and the Seagulls had even made a bid.

L’Equipe have an interview with the 25-year-old today, and they claim that Bournemouth and Watford are also in the race.

According to the newspaper, the Premier League duo have both made enquiries about Kamara this month.

Interestingly, L’Equipe make no mention of either Brighton or Palace, but Lyon and Mallorca are named as other interested parties. The Spanish side have already made a €3m bid.

That is presumably where the other clubs, Bournemouth and Watford in this case, will have to start from moving forward if they decide to make an official bid this month. 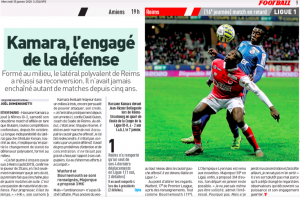 Kamara, for his part, is open to making a move, although he is refusing to focus on the rumours about his future.

“I haven’t even been asked,” he told the newspaper.

“Why not. But if I lose my concentration and I’ve got my head elsewhere, I’m not going to get out of it.”