The season has barely started, but Premier League clubs are already keeping an eye on potential targets for the coming transfer windows.

A proof of that was the number of sides who had scouts in Portugal watching Porto’s match against Krasnodar for the Champions League last night.

Newspaper A Bola calls it an ‘English army’, who are ‘thinking of January’ signings. The list of clubs who sent emissaries includes the likes of Bournemouth and Southampton.

The two clubs haven’t recently been linked to players involved in this match. And although they normally travel to Portugal to watch players from Portuguese clubs, perhaps it was a better night to keep an eye on the away side. 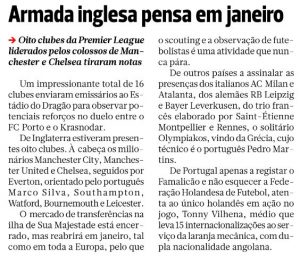 After a 3-3 draw in Russia, Krasnodar managed to open a 3-0 score at the Estádio do Dragão last night. Porto later scored two goals, but that wasn’t enough for them to go through.

The Krasnodar players who stood out were Tonny Vilhena and Shapi Suleymanov, who silenced the 45.000 people at the Dragão.