With the Ligue 1 season coming to an end, it’s that time of the year when certain teams are having to come to terms with the fact some of their players will be leaving the club in the coming months.

Among those, probably set to take the biggest hit, are OGC Nice, who have struggled to recapture last campaign’s form and find themselves in 6th, 20 points off fourth.

Alongside the likely departures of Jean-Michael Seri and Mario Balotelli is Alassane Pléa, whose future we’ve already covered a number of times, with clubs like Bournemouth and Leicester City linked in the past.

The last update we received came from L’Equipe around a month ago, who explained Eddie Howe’s team had joined Claude Puel in the 25-year-old’s pursuit, and that still happens to be the case. 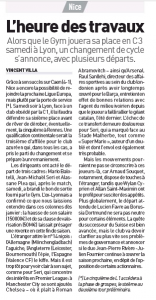 The same newspaper claim on Monday that both Premier League sides are still ‘spying on’ Pléa as they look to improve on this season’s goal tally next year.

With release clauses forbidden in France, Nice have apparently agreed to a ‘valuation clause’, which will most likely be a gentleman’s agreement between all parties, of around €50m for Pléa.

While Leicester have mostly relied on Jamie Vardy for goals, the Cherries have struggled to find a consistent goalscorer, with both Joshua King and Callum Wilson on seven league goals this year.

Pléa has 14 to his name in Ligue 1, second only to Balotelli’s 16, which is impressive considering he has also spent a chunk of the second half of the season playing down the left-wing.

Providing competition for Bournemouth and Leicester are Valencia, who were already sniffing around in April, and Borussia Mönchengladbach in Bundesliga.

It seems unlikely Nice will ask for the full amount of the ‘valuation clause’, but it does mean that if a bidding war breaks out, they can just point at it and say ‘first one to hit this gets Pléa’.