Since leaving Arsenal last summer, Chris Willock has been living a hard time in Portugal. But apparently, it won’t stop him from seeking his goals.

The winger joined Benfica on a five-year contract last year, and is still to make an official appearance for the Eagles.

As written by newspaper A Bola this Monday, the player was told by manager Rui Vitória during preseason that he wasn’t part of the plans for the first team squad. That’s why he’s playing with Benfica B.

Now the most interesting part is that A Bola claims that Willock had offers to return to the Premier League. Bournemouth, Huddersfield, Watford, PSV and Club Brugge all wanted him on loan, according to the report. 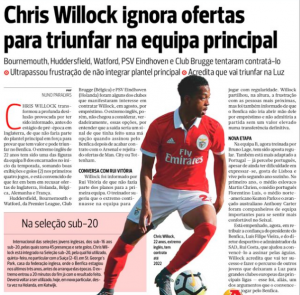 But the offers were rejected both by Benfica and the player. Willock believes that by making this move now, he would confirm that he’s made a bad choice when rejecting offers from Man City and Tottenham last summer.

However, Willock made clear to the Benfica board that he wasn’t very happy to be left out of the first team squad, even though he will fight for his place during the season.

The outlet claims that Willock is only leaving if some club offer a good amount of money. So if Bournemouth, Huddersfield or Watford are thinking about bidding in the next transfer windows, they better be prepared to spend. Even if he’s still a Benfica B player by then.