Bruno Fernandes’ performance last night was good enough for newspaper A Bola to leave Lisbon clubs aside and put the Red Devils star on their front page.

Their cover today says ‘Boss Bruno – Portuguese continues to command Manchester United’, as they highlight how great he’s been this season.

The story claims the club’s recent history should be divided between ‘Before Bruno and After Bruno’, as ‘there’s no other like him’.

A Bola isn’t the only newspaper giving high praise to the midfielder. O Jogo writes about ‘Brunited’s sweet revenge’, and Record has a headline saying ‘Bruno from the Devils’. 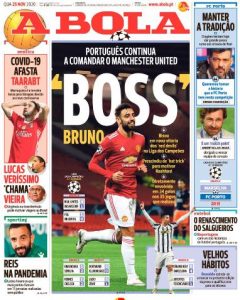 What all newspapers highlight is that besides scoring two goals, Bruno Fernandes had the chance to make it a hat-trick, but let Marcus Rashford take a penalty. A Bola says he did it to ‘motivate’ the English striker.

Bruno Fernandes now has nine goals and five assists in 13 games for Manchester United this season. The Portuguese media was used to see him reaching great numbers in the local league, but his form at Manchester United seems to be impressing them even more.