Jadon Sancho to Manchester United was the most tedious rumour of the summer market.

Despite what felt like a transfer rumour arms-race, it didn’t really appear Ole Gunnar Solskjaer’s side were making a big effort for the signing. Borussia Dortmund had their deadline, and a perceived (we’ll come back to that later) asking price of €120m, and Manchester United didn’t fully go for the player.

The rumour is likely to grow again ahead of the next summer window, and France Football give it a little encouragement in their magazine this week. They have a section each week in which they give little snippets of transfer information, and as part of that in the current edition they say Tanguy Coulibaly is on Dortmund’s list to ‘replace’ Sancho.

When it comes to the Englishman, France Football believe he could be heading back to the Premier League, with Manchester United the only possibility edged in.

Coulibaly plays for Stuttgart, and has scored twice in 14 Bundesliga appearances so far this season. The 19-year-old is French, hence the interest from his home country, and his contract runs until June 2023.

Earlier this month, Borussia Dortmund CEO Hans-Joachim Watzke suggested the claimed asking price wasn’t really a thing: “The alleged transfer fee often mentioned in the media never existed in reality. And if you get a signal at some point that a large part of the 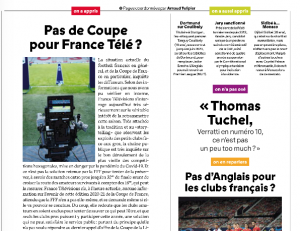 amount offered will only be paid in a few years, it will finally be a pure theoretical discussion.”

That looked like him preparing the ground for a sale at a lower price, whilst still being able to insist BVB hadn’t lowered their demands.