This week’s edition of the fine German magazine SportBild has a big feature on Borussia Dortmund and Lucien Favre.

BVB just can’t seem to get their manager pick right and will change again in the summer, and Nice’s Favre is a prime candidate.

Everyone in charge at the Bundesliga club is said to be calm about appointing a manager this summer, as the decision has already been made: Lucien Favre must replace Peter Stöger.

SportBild think Arsenal are competition for BVB because the London club are also keen on Favre. They take claims from The Telegraph to say Sven Mislintat will be involved in the manager recruitment and therefore it seems taken as given that Favre will be a target.

Arsenal are also said to know of Favre’s release clause at Nice, which means he can leave the French club in the summer for €3-5m. 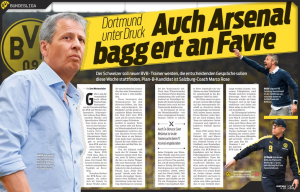 SportBild then somewhat dismiss the Arsenal competition because Dortmund are hugely confident they’re favourites and Favre wants to join. The manager prefers the BVB option and should be able to get Champions League football.

Talks have already taken place at some level.

Arsenal seem a supporting actor here, window dressing in what is essentially a story about Lucien Favre and Borussia Dortmund.