Although FC Porto seemed really keen on signing Alfredo Morelos from Rangers this summer, the rumour has slowly been disappearing from the Portuguese media.

It was claimed many times the Dragons were struggling to match the demands made by the Scottish side, and with the striker’s price not changing, there haven’t been any updates on the situation.

Today, newspaper O Jogo is back mentioning Morelos, and as they report that he’s currently in quarantine as he gets ready for Rangers’ pre-season, they basically say that Porto are giving up on the transfer.

The outlet states once again that he’s the centre-forward the Dragons wanted to replace Moussa Marega, but add that the chances of signing him are ‘starting to fade’, which is likely a boost for Steven Gerrard, who won’t have been overly thrilled at the prospect of losing his striker. 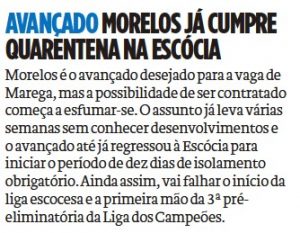 O Jogo write that the saga has been without developments for weeks, and with Morelos now landing it Scotland, the transfer gets even more unlikely.

The Portuguese media previously claimed Rangers were demanding over €15m to let the striker go, and even though there were claims about an official bid from Porto, it seems the Dragons never got close to that amount.