Leicester City may have been handed a boost ahead of their UEFA Conference League clash with PSV Eindhoven on Thursday.

That’s because the Dutch side appear to have messed up their training regime ahead of the European clash.

Algemeen Dagblad explain that PSV ‘bounced back powerfully’ after the international break with an injury-time goal sealing a point against Twente over the weekend.

While that was a positive, Roger Schmidt’s side was ‘completely overrun’ in the first 30 minutes of the game, something the coach was to blame for.

He later complained that his side are tired as that was their 49th game of the season, but that statement ‘worries’ the club.

They, and their fans, believe that this was not the time to bring up such a complaint because PSV have just enjoyed a two-week break and should have been ‘fresh’.

That was not the case, though, and his training methods are coming under scrutiny. AD state that it is ‘remarkable’ that he insists on a training method in which players were not given group training for six consecutive days during the international break.

PSV managers usually opt for one free weekend during this time, but in this instance, the current crop were already on vacation on Monday morning and training individually.

That ended up causing something of a ‘vacation mode’ mindset, particularly in the clash with Twente, where the focus ‘seemed gone’. 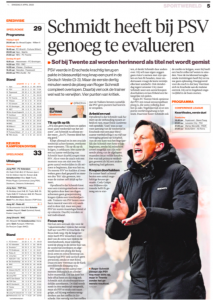 And there’s a growing feeling that while the extra rest might benefit PSV in the long run, there appears to have been a negative effect on mentality, something that will certainly have ears pricking up at Leicester City.

During the weekend game, they ‘looked lethargic’ and were completed ‘outplayed’ by a team who put on high pressure and were on top of everything. Indeed, it’s stated that they had ‘no answer tactically’.

That’s something we’re sure Schmidt will work on before the clash with Leicester, but there is a sense that PSV might have messed things up during the international break, something the Foxes might be able to take advantage of like Twente did.