Home Championship Bolton Wanderers lose race for Brazilian defender, could have got him for...
SHARE

According to reports from Portugal, the 26-year-old, who has his contract expiring this summer, has decided to leave The Robins after relegation to League Two, despite the club’s offer for a renewal.

Newspaper O Jogo claims that Bolton Wanderers, who have just been promoted to the Championship, also had interest in the transfer, but couldn’t beat the competition. The outlet says the announcement should be made in the next few days. 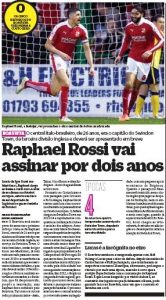 The Brazilian has struggled a lot since moving to England. After being signed by Brighton in 2012, he had problems getting an EU passport and was only available to play when signing for Isthmian League side Whitehawk in 2014. That’s where he attracted the interest of Swindon.

Even though we’re used to seeing players leave the Portuguese first division to join Championship sides, it seems Raphael Rossi’s choice was the opposite after rejecting a move to Bolton.