We’ve already covered two different articles on Newcastle United’s interest in Thomas Strakosha, and with each one, a transfer seems less and less likely, just because of the circumstances.

Gazzetta dello Sport had the big claims on Sunday, claiming the Magpies were ‘ready’ to offer €40m for the Albania international, which we highly doubted seeing as that went against everything Mike Ashley stood for on the transfer window.

Clearly reluctant to spend, which is widely believed to have played a part in Rafa Benitez’s departure, Newcastle have, however, been helped by the £30m Leicester paid for Ayoze Perez.

That’s what Il Tempo bank on when reporting on the story, explaining €40m would be needed to sign Strakosha from Lazio. 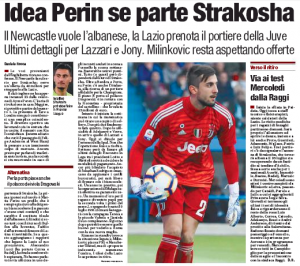 They see Newcastle as being able to afford the goalkeeper if they so wish, which is why the Serie A side have already started looking at a replacement should the 24-year-old head to the north of England.

The main candidate would be Juventus’ Mattia Perin, whose bench warming days behind Wojciech Szczesny got a lot less comfortable following the return of Gianluigi Buffon in Turin.

Furthermore, it’s revealed Igli Tare, Lazio’s director of football, has travelled to London, where he held a summit with Kia Joorabchian regarding ‘entries and exits’, and Il Tempo don’t believe it’s a ‘simple coincidence’ he’s there amid the Newcastle speculation.

It’s all a bit murky, but it appears everything (or everyone) has taken a step back after this weekend’s huge claims.