Wearing one of his many hats, Guillem Balague, in his role for AS, has today strongly pushed the idea of Thibaut Courtois leaving Chelsea in the not so distant future.

With Real Madrid failing to get Kepa and the Athletic Club Blibao goalkeeper renewing his contract, it brings goalkeeping options who had been discarded back into focus.

One of those is the Chelsea goalkeeper and under the headline ‘PSG go for Courtois’ there’s a subber saying ‘The Belgian goalkeeper wants to sign for Madrid’.

Balague explains Real Madrid will have to move quickly if they want to sign Courtois, because PSG have already made an offer. Whilst the goalkeeper is said to prefer a move to Madrid, where his two daughters live, he can’t do that unless the club make a strong move for him, something which it feels has been encouraged for some time.

The article explains Courtois has had a Chelsea renewal offer in his hands for over a month, one which would make him the best paid goalkeeper in the world. But he’s not responded to it yet because he hoped Real Madrid  ‘would have done the necessary work to agree a price with Chelsea, close the agreement and be transferred next summer’.

Madrid have ‘put their cards on the table’ in recent days, but PSG had already got in there, according to the claims.

Courtois has already received a ‘great offer’ from PSG which exceeds that from Chelsea, and Balague says: ‘The seduction of PSG has left him spellbound.’

The 25 year old is said to be surprised Real Madrid haven’t moved more quickly for him, and has not yet responded to the offer of PSG. 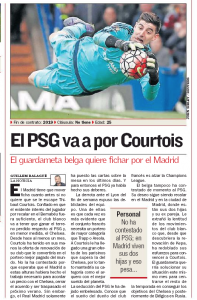 That sounds very much like, for Courtois, the ideal scenario would be Real Madrid agreeing a fee with Chelsea this month so he can move to the club next summer, and also be the highest paid goalkeeper in the world.

It must be said that PSG’s local and generally good press haven’t carried anything on this recently.