For reasons known only unto themselves, the Italian media love using the words ‘blitz’ and ‘London’ together, and that’s how Il Messaggero are presenting their latest Toby Alderweireld claims on Tuesday.

Also for reasons know only unto themselves, and their local media, AS Roma still have some confidence around signing the Tottenham player.

Despite the Belgian’s clause now having expired, Roma haven’t been completely put off… because they never intended to pay £25m anyway.

Whether it’s due to delusion, or they’ve been given some unlikely hope from Spurs, Roma are continuing with their Alderweireld quest, after earlier Italian claims of a rough agreement with the player.

The 30 year old is the Giallorossi’s priority, according to Il Messaggero, and whilst they have other options, it’s Toby getting the majority of the attention across the Italian sport media. 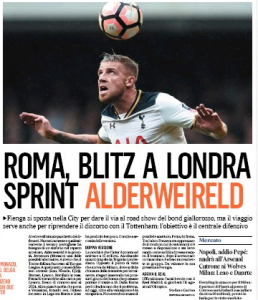 Claiming Tottenham are now ‘evaluating’ an offer from the Serie A club, the Italian newspaper doesn’t actually say what that offer is, so it’s unclear whether it should be laughed at or not.