Lucas Digne was one of the players most disappointed to miss out on Didier Deschamps’ squad for the World Cup, and that was compounded when France won the competition.

As much as players like the Everton left-back will have openly said they wanted their country to win, it must surely have hurt to see teammates pick up the trophy.

Missing out on the squad was the nudge Digne needed to leave Barcelona, and the Catalan club were happy to facilitate a sale, hoping they could bring in some cash for a player who wasn’t a big part of the club’s plans.

A good start at Everton has led Digne back to the France squad, and Juventus midfielder Blaise Matuidi has spoken about his national teammate and the specific progress he’s made since moving to Goodison Park.

L’Equipe quote the 31 year old as saying: “Lucas played at PSG, Roma, Barça, the big clubs where he progressed offensively. And here he plays in a championship that forces him to be stronger defensively. I don’t see all his matches but I 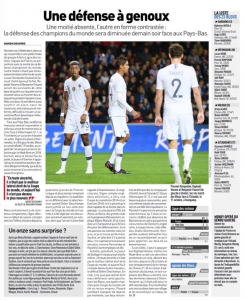 have seen him, and I find him effective. Above all, in the selection (national squad) he never disappointed.”

Digne is expected to start for France against Germany as he looks to cement his place in the national set-up.

It’s just a shame for the Everton player that it didn’t happen a few months earlier.