Blackburn Rovers, Bournemouth and Newcastle United were presented as the clubs who’ve been interested in the 22-year-old, with them all scouting his performance against Boavista.

Now it turns out that Rovers seem to be standing out in this race, because A Bola brings another story on the player today, and highlights the Championship side this time.

It’s said Blackburn’s interest is the ‘most serious and sustained’, with the move looking pretty possible, since Rio Ave are interested in negotiating Borevkovic’s sale. 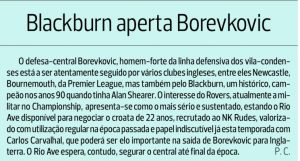 It’s claimed that former Sheffield Wednesday and Swansea City manager Carlos Carvalhal could be important in the player’s move to England, since he’s had a big part in the player’s evolution at the Portuguese club.

But despite their wish to make money with the sale, it’s said Rio Ave would rather let him go in the summer transfer window. So perhaps Blackburn would have to wait a little to have the defender.