Denmark’s Ekstra Bladet has an interesting article on Paul Onuachu today, and it brings in Birmingham City.

Onuachu currently plays for FC Midtjylland and is wanted by Belgian club Genk. It’s explained the 25 year old striker would be very tempted by a move to Genk, because it would give him the opportunity to play Champions League football.

However, what they’re offering isn’t close to what the Danish side believe they can get.

Ekstra Bladet explain Genk are prepared to send 35m Danish Krone to FC Midtjylland, but they want ‘twice as much’.

That would make 70m Danish Krone, converting to £8.3m.

There’s something different about these claims, it’s stated that rather than Onuachu’s agent trying to find offers, it’s actually ‘strong networks in England around Matthew Benham’ doing the work. 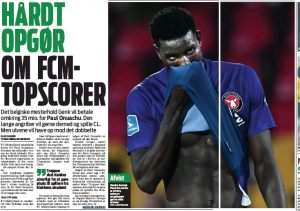 Benham owns FC Midtjylland, but it also the owner of Brentford.

Ekstra Bladet believes this is the light in which Birmingham interest should be seen, with the insinuation being the player may have been offered to the Blues.