Birmingham City are in the picture to sign Angers’ Souleyman Doumbia, according to a claim from France.

Operating mainly as the left wing-back last season, he finished the campaign with one assist from 28 matches.

The 25-year-old has less than 12 months left on his current deal and has multiple options to leave the Ligue 1 side this summer.

Monday’s edition of L’Equipe has a report on the Ivory Coast international, in which Birmingham City and FC Union Berlin are named as his suitors.

The Bundesliga side finished fifth last season, and with that, they have secured a place in the group stage of next season’s Europa League. Union Berlin have made Doumbia one of their priority targets this summer and the player would be interested in joining them. 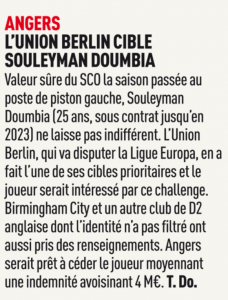 Meanwhile, the report states Lee Bowyer’s side and an unnamed Championship club have ‘taken information’ about signing Doumbia.

Angers would be ‘ready to sell’ their wing-back for around €4m.

Birmingham City will have to find a way to get ahead of Union Berlin, if they wish to secure Doumbia’s services.