As spring was getting ready to turn into summer and the transfer window hadn’t opened yet, Bournemouth were the English club most linked with Dijon’s Lois Diony.

The Birmingham City rumours grew so much that, just over a month ago, the Birmingham Mail published a story about fans ‘looking to the skies’ wondering if Diony was flying in to join their club, after the player posted a photograph of an airport.

Any looking to the skies will have been in vain for Birmingham City fans, as Diony joined Saint-Etienne around a week later.

Speaking to L’Equipe about his decision making, Diony was asked why he chose 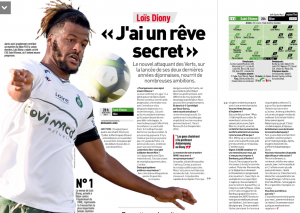 ASSE when there was the option to move to England. The 24 year old explained: “Who does not dream (of England)? But it was too early to go. I want to succeed one or two full seasons with Saint-Etienne, and then we’ll see.”

Birmingham City will have moved on by that time, and, if Harry Redknapp gets his way, will be a Premier League club who may have their sights set higher than the former Dijon player.