It’s not unusual see the name of a Championship club on a Portuguese ‘spy’ list.

Clubs in Portugal release lists of officials who attend matches, and there’s often clubs from England present, trying to find the next bargain from the country.

Birmingham City certainly aren’t one of those who are there most often, but they had someone watch the match between Moreirense and Rio Ave on Friday evening, reports A Bola.

There’s no indication who Birmingham are considering signing, but a couple of names are worth a mention.

Moreirense attacker Chiquinho, 23 years of age, has recently been linked with a number 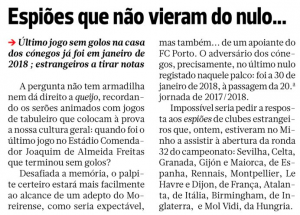 of clubs including Norwich City.

For Rio Ave, Gelson Dala is a name who has been written a little about.

The 22 year old striker is on loan from Sporting.