Home Championship Birmingham City have continued to pay player €160k a month despite him...
SHARE

Friday’s edition of L’Equipe has the French newspaper’s annual look at salaries in Ligue 1.

There will be headline stories, such as how much they say PSG players are paid, and also their claims on those outside French football. Each year the big amounts are contested, but it’s usually the smaller claims which are the most interesting.

For Angers, the biggest earner is Cheikh N’Doye, who is technically on loan from Birmingham City.

The Championship club loaned the midfielder back to his previous club last summer, and said at the time: ‘Due to the restrictions Blues have had placed on them by the EFL, the Club is considering various ways and means to aid their profitability and sustainability targets to comply with regulations.

Ideally Garry Monk would not want to reduce the number of players who make up his preferred senior squad.’

N’Doye is out of contract in the summer at Birmingham, and already has a deal in place with Angers, although he’ll be earning less than he is this season. 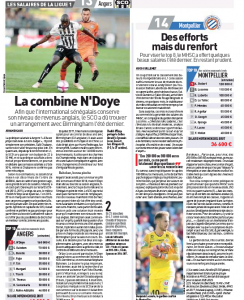 L’Equipe state Birmingham tempted the then free agent to sign for them with wages of €160k a month.

When he left in the summer, the French newspaper state part of the agreement saw Angers pay a loan fee (undisclosed) and Birmingham agree to continue paying the player’s €160k a month wages for the whole season.