That’s according to SportBild, who say the Birmingham youngster ‘rejected’ Bayern weeks ago and has not changed his stance since then.

Bellingham is one of, if not the hottest property in English football at this moment in time, after breaking through at Birmingham aged just 16.

He has made 35 appearances in all competitions for the Blues this season and impressed in plenty of them, with his displays belying his age and lack of experience.

Our Story: Jude Bellingham @BCFC will not join @FCBayern. @BVB is still the favorite for the transfer @SPORTBILD @westsven

A whole host of top European clubs are keen to sign him but recent weeks have seen Borussia Dortmund move to the front of the queue.

Reports over the last month indicated the Bundesliga side are pushing hard to secure the Birmingham youngster and had already agreed on a fee with the Championship club.

They appear to have won him over too, with SportBild claiming that Bellingham has made it clear that he wants to play for Dortmund next season. 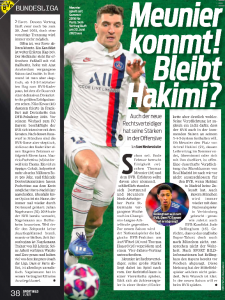 He has already rejected an approach from Bayern for his services, seemingly preferring Lucien Favre’s side above everyone else.

That would be wise, given they have a strong history of not only developing young talent but English talent too, Jadon Sancho being the obvious example.

Dortmund will now be hoping to get a deal wrapped up before anyone else can get in and try to sway Bellingham’s thinking.