The Glazers pulled off one of the biggest heists in football when they mortgaged Manchester United against itself to buy the club.

It’s played a big part in the decline at Old Trafford, with Sir Alex Ferguson managing to paper over cracks which have since nearly brought the walls down.

Other potential owners have been linked, Saudi Arabia’s ruling family recently providing lots of column inches. Despite all the noise, the story was always shaky, as we pointed out on more than one occasion, and the government’s communication channels officially rubbished it in February.

Still, Manchester United supporters will understandably cling to any chance of better owners, even if the Saudi option brings far more negatives than positives.

Today’s edition of L’Equipe has an article on Jim Ratcliffe, the UK’s richest man.

He’s not the richest man actually in the UK, as The Guardian reported in February that he’d moved to Monaco, with the hope of saving up to £4bn in tax.

Ratcliffe, who bought Swiss club Lausanne Sport in 2017, recently took over the Sky cycling team after the TV company dropped their sponsorship. It now carries the name of his chemicals firm Ineos.

L’Equipe have explained several times how he’s been interested in buying OGC Nice, which isn’t too far away from Monaco. The club’s Chinese owners haven’t been jumping forward for a sale. 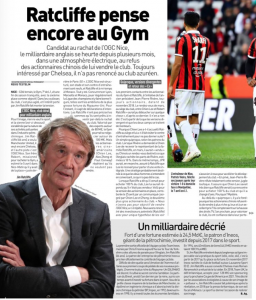 Chelsea have also been the subject of Ratcliffe interest, and that’s been reported a number of times. On Thursday L’Equipe say he still ‘wants’ the London club, and that he’s ‘wanted’ Manchester United.

On April 6th, the same French newspaper reported Ratcliffe has considered an offer for Manchester United, a club he was described as ‘a huge fan’ of.

There’s no update on how the billionaire, worth more than £20bn, currently feels about the Old Trafford club, and the French newspaper probably wouldn’t know. But if United fans want a prospective new owner to chase, then Ratcliffe isn’t the worst half-chance.

After all, he was born in Greater Manchester and lived near Oldham until the age of 10.