Liverpool travelled to Germany this week and, without much fuss, dispatched Bayern Munich from the Champions League.

It wasn’t really nail-biting, and it wasn’t so dramatic, Jurgen Klopp’s men confidently went about their business and won the match 3-1.

There can be few complaints about the scoreline or result.

The Liverpool victory means there are four Premier League teams in the last eight of the competition, and no clubs from the Bundesliga. Bayern, Borussia Dortmund and Schalke were all knocked out by English sides in the last sixteen.

Klopp’s side were organised, confident and had individuals put in very good performances. That’s something which has impressed Bild and shows in the German newspaper’s player ratings, although not every Reds player got a good mark. 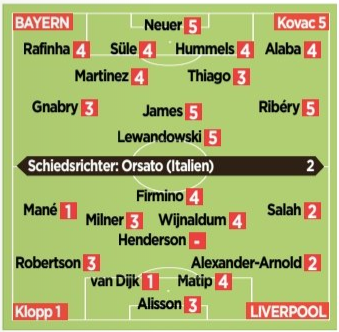 Sadio Mane and Virgil van Dijk very much deserved their 1 ratings, and perhaps the same can be said for the four Bayern players, including Manuel Neuer, who were given a 5.