Łukasz Fabiański picking up an injury is bad news for West Ham. The goalkeeper has been excellent for the Hammers for some time now, so seeing him forced off the pitch at the weekend was a blow.

The news was quickly picked up in Poland, and is big news in the country. That underlines just how highly Fabianski is rated for his national team, despite them having other well-known options.

Wojciech Szczęsny, formerly of Arsenal, is the best known and it’s he who is expected to take over for the crucial upcoming European qualifiers. However, he’s not held in the same regard as the West Ham man, and it was recently made clear he’s very much second choice.

Monday’s edition of Przeglad Sportowy has a double page spread on the situation, and there’s the worry Fabianski will miss three weeks at least, which would rule him out of the upcoming international break. 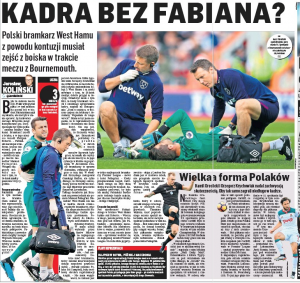 Poland face Latvia on October 10th and then North Macedonia on the 13th, fixtures they need to be getting results from.