Newcastle United are eyeing up a move for manager Antonio Conte after their takeover was completed this week.

That’s according to Gazzetta Dello Sport, who say the Italian manager is already in Amanda Staveley’s diary as a potential target.

The newspaper explains that Newcastle’s new owner, Prince Mohammed bin Salman was keen to buy Inter Milan in the summer and holds Conte in high esteem.

Had that takeover gone through, he would have insisted Conte remain as Inter Milan manager, while there would not have been exits for Romelu Lukaku or Achraf Hakimi either.

That never came to pass, but his admiration for Conte has not waned, and ‘nothing could be easier’ than for Conte to embrace the project were it put to him.

Staveley will lead the negotiations for any replacement for Steve Bruce and is a big fan of Rafa Benitez herself, but it is Conte who bin Salman would like. 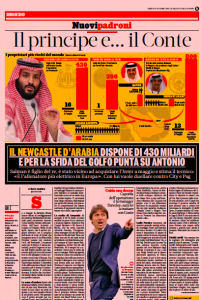 Conte would expect ‘immediate reinforcements’ for Newcastle, but that would not be a problem for what is an ‘ambitious’ project with a ‘bottomless’ pit of money to spend.

‘Clear messages’ are being sent from Saudi headquarters that they like the Italian and want to bring him to St James Park, and as far as the newspaper is concerned, there are billions of reasons why he would accept.

It seems Staveley ‘will negotiate’ with Conte at some point, with him likely to be the first big target of the new Newcastle era.