Paul Pogba to Real Madrid was the big move everyone was waiting to happen this summer, yet with a week of the window left, it’s yet to get going.

Pogba hinted earlier this summer he was thinking about leaving Manchester United and Real Madrid, particularly Zinedine Zidane, have made it clear they would love to take him to Spain.

United are not keen on losing the Frenchman, though, and have played hardball throughout the negotiations with the Spanish giants.

With the Premier League window long since closed and Pogba playing a pivotal role under Ole Gunnar Solskjaer, it seems unlikely he will be leaving at any point soon.

That’s the stance Marca take today in their coverage of the ongoing situation. According the newspaper say, Real Madrid have let it be known their squad is ‘closed’ for the season. In short, there will not be any further incomings or outgoings. 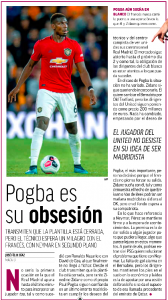 While Real Madrid’s chiefs will remain ‘attentive to what can happen’, it seems they’ve closed their transfer business for the summer.

And that may be down to the fact the situation with Pogba has not changed.

Zidane still wants the player, and he wants to move to Spain, but he will not push for the transfer. Manchester United, meanwhile, continue to demand €200m for any move to happen.

Madrid have other options they can finalise, such as Donny van de Beek and Christian Eriksen, but Zidane continues to dream of Pogba. He, though, will have to wait for his countryman according to the newspaper.