Sevilla are ahead of Leicester City and Crystal Palace in the chase for Schalke centre-back Ozan Kabak, reports this week’s edition of SportBild.

Chelsea are keen to sign Jules Koundé and faced with the possibility of losing their star, the La Liga side have identified Kabak as his possible successor.

Earlier today, we relayed news from Spain the Blues’ interest in the Frenchman is ‘real’ and they have ‘reached an agreement’ with him for a five-year contract.

Chelsea are yet to begin talks with Julen Lopetegui’s side, but there’s belief discussions would soon take place. Based on the situation around Koundé, Sevilla have taken steps to sign his replacement.

According to SportBild, the Spanish club have ‘given the signal’ to Schalke that they ‘want 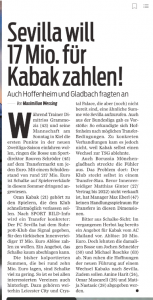 Schalke, who need to raise funds through player sales, ‘can hardly refuse’ an offer in that region.

It’s claimed Leicester and Crystal Palace are interested in the Turkey international, but so far, neither of them are ready to offer a ‘similar sum as Sevilla’.

Sevilla’s effort to sign Kabak may not be good news for Leicester and Palace, but it would be well received by Chelsea, who are chasing Koundé.