Home Championship Big effort made on Aston Villa transfer over the weekend, convenient for...
SHARE

A convenient situation seems to be developing for Aston Villa and their hopes of getting a good deal for Carles Gil. A few days ago Real Betis were brought into the equation, and just the thought of that seems to have spooked Deportivo La Coruna.

Following on from that, Monday’s edition of Mundo Deportivo explained that Deportivo have ‘accelerated’ talks to sign Gil from Aston Villa, hoping to get the player on a further season long loan.

Monday’s edition of AS reports that Betis have also given things a kick forward, and made efforts ‘throughout the weekend’ to get the transfer over the line. There’s no claim from AS whether Betis want a loan deal or permanent move, but a first attempt at a temporary 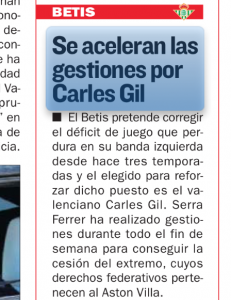 switch could be likelier.

Competition between the two clubs can only be a good thing for Aston Villa, and may pressure one of the two, or even both, to come up with a proposal for a permanent deal.

Any initial proposal is likely to be too low, but it’s only June and it would certainly be a step in the right direction.