Eden Hazard to Real Madrid is simply a matter of time, report Marca in their Thursday edition.

The Spanish newspaper explain that Chelsea’s star player will be Madrid’s first signing of the summer, and that the move is now almost settled.

It had previously been reported in Spain that an announcement was very close, and Marca say it’s just waiting for both clubs to finish their seasons. Real Madrid aren’t fighting for anything, but Chelsea want to make sure they qualify for the Champions League, so there’d be no announcement until that is settled.

The Premier League campaign ends on May 12th, and Marca believe ‘logic dictates’ things will be made official around a week later.

That would take things to May 19th.

Despite having said all of that, Marca then go on to say the financial agreement between Real Madrid and Chelsea isn’t yet settled. 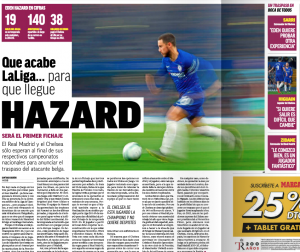 The English club had been asking for €140m, and it’s expected Madrid will get a significant discount.

A fee above the club’s €94m record is thought to be possible, despite Zinedine Zidane’s side originally looking at less than that.