While the general consensus in the press is that Arsenal did make a €60m or so offer for Dayot Upamecano in the summer as they searched around for a new centre-back (eventually settling on William Saliba and David Luiz), the player’s release clause remains a big question mark.

We covered a number of claims in August on the subject, as every German outlet reporting the story had their own version, and now L’Equipe bring their own on Tuesday.

On August 5th, Bild stated the young Frenchman’s exit clause stood at €100m, which is set to drop to €80m.

Over at Kicker on August 7th, who relayed information from Der Spiegel’s Football Leaks, the belief is RB Leipzig set the bar at €90m. 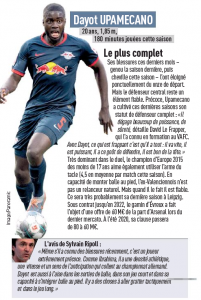 As for L’Equipe, they remind everyone of the Gunners’ bid and claim his clause is currently at €80m and will go down to €60m (the price Arsenal put forward this summer) in 2020, making him a bit more affordable for everyone.

While Unai Emery’s side eventually went for Saliba (and loaned him back to Saint-Étienne for the year) before buying David Luiz for added experience late on, there are still question marks about their defence in general, and perhaps a return for Upamecano could be on the cards next summer.

Either that, or someone else could come knocking, as his deal ends in 2021.