Home Europe ‘Should be a bestseller’ – Shirt already picked out for Man City...
SHARE

There’s barely an issue of SportBild which goes by without claims around the future of Leroy Sane. The Manchester City player has been of interest to Bayern Munich since last summer, and at one point it looked like a move was a matter of days away.

In Germany it wasn’t thought that Sane would play for Manchester City in the Community Shield, given how close the transfer to Bayern was. He did, and the football Gods responded with a cruciate ligament injury which cancelled any potential transfer and much of the season for Sane.

Bayern interest didn’t stop, and instead all eyes turned to this summer. Claims of talks and agreements have annoyed Manchester City, so this week’s edition of SportBild has something a little different. 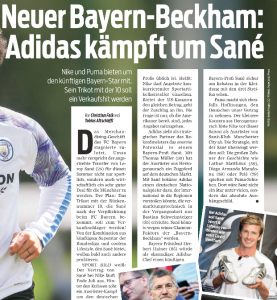 They report that Nike and Puma are battling for a sponsorship deal for the ‘future Bayern star’, with a suggestion Adidas could enter the picture. The transfer is presented as near certain, and it will be ‘a very good deal for Munich this summer’.

Sane is set to be given the No.10 shirt, and SportBild say it ‘should be a bestseller’.

The Manchester City player would become the ‘Bayern-Beckham’, believe SportBild, which is perhaps pushing things a little.