Home Europe ‘The Best’ and ‘The Worst’ – How the Italian media rated and...
SHARE

Tottenham’s Champions League campaign may not have been plain sailing but it’s certainly been a whole lot of entertainment.

Now, if Spurs want to keep it in their own hands, there’s just the small matter of beating Barcelona in the final group game. At the Camp Nou.

Victory over Inter Milan on Wednesday night made that possible, and Thursday’s Italian newspapers have given their take on Tottenham’s performance.

First up is Gazzetta dello Sport, who fell a little bit in love with Christian Eriksen.

They rate him ‘The Best’ on show, give him 7.5/10, and say his shot was ‘unstoppable’. That he didn’t start the match is dubbed ‘a real sacrilege’.

‘The Worst’ for Tottenham was Lucas Moura, who got 5/10. Gazzetta say it simply wasn’t the Brazilian’s night and he got a ‘well deserved early shower’. 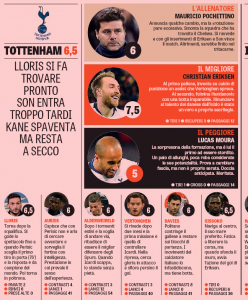 Dele Alli was praised, even if the Italian newspaper believe those in front of him didn’t help at times: ‘The first danger for Spurs has his signature. Floats between the lines, looking in vain for signs from Lamela and Moura. When Eriksen and Son enter, he finds the light and makes the assist.’

Hugo Lloris was given 6.5 and Gazzetta say the Frenchman was enjoying the show until Ivan Perisic disturbed him on 76 minutes, then the World Cup winner ‘returned to his armchair’.

La Repubblica believe the best starters were Harry Winks, 7/10, who they said of: ‘Fast trot, turnaround, quality, order, and even a cross. He is 22 years old, and already in the national team.’

Lucas was also the worst for Spurs as far as La Repubblica are concerned, 5/10, and it’s said his presence in the team didn’t make sense.