There’s a huge transfer story in De Telegraaf on Tuesday, and Manchester United get a mention.

They’re not the focus of it, that goes to Ajax.

Steven Bergwijn is of interest to his club’s rivals and it would be a controversial transfer seeing him move from PSV.

The Dutch newspaper states Ajax are ‘working behind the scenes’ on what would be one of the ‘most spectacular transfers in the Netherlands… ever’.

Fulco van Kooperen, the player’s agent, is quoted as saying: “I cannot deny that Stevie has been discussed between Marc Overmars and me.”

That Overmars chat is ‘likely to be seen as a provocation’ in Eindhoven, and any move could be difficult.

Berwijn only wants to decide on his future after Wednesday’s match against Heracles Almelo, which will be the end of PSV’s season. He doesn’t only have interest from Ajax, with Manchester United and Inter Milan also said to have made contact.

De Telegraaf explain: ‘Until now, he has completely left the contacts with other clubs, such as Manchester United and Internazionale, to his agent. Of course, it is ultimately up to the player to make a decision.’ 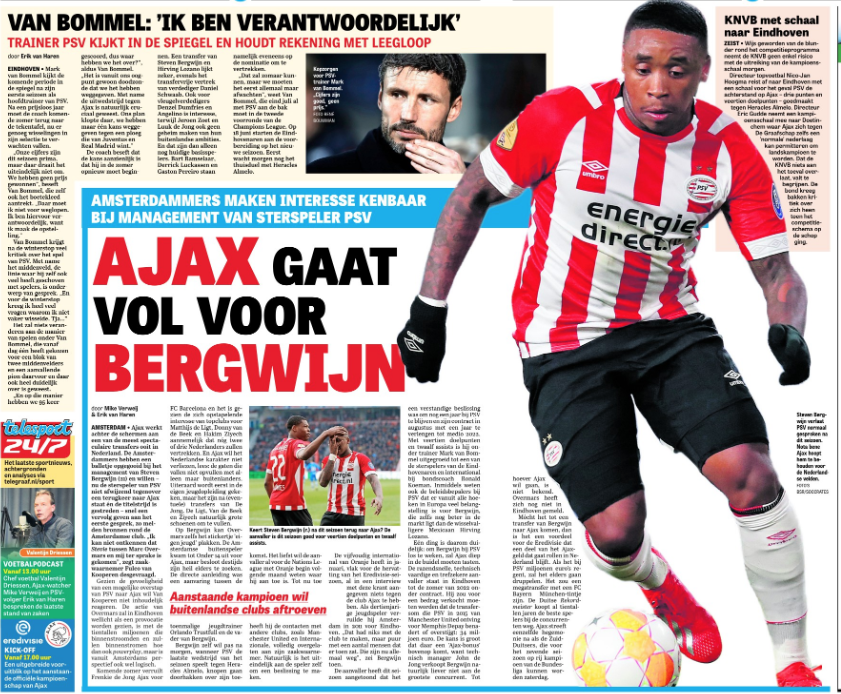 PSV would surely rather Berwijn leaves the Eredivisie, rather than joining a club they’ll be fighting for the title with next season. A transfer fee will ‘approach or exceed’ the €34m which took Memphis Depay to Old Trafford.

The 21 year old right-footer can play on the left or right wing. He has 15 goals and 13 assists this season.