The former Netherlands international impressed for Besiktas last season, which brought him to the attention of the English club.

It’s been claimed Newcastle United boss Rafael Benitez wanted to sign his former player before the window closed last week, but Besiktas stood firm and insisted he wasn’t for sale.

Throughout the last window, Newcastle United were looking to bolster their attacking options, and they were linked with a number of attackers. AMKSpor report Benitez wanted a reunion with Babel after the pair worked together at Liverpool. 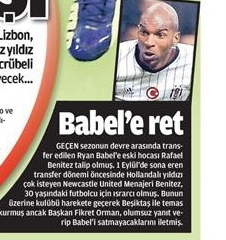 However, Besiktas president Fikret Orman wouldn’t allow the Dutchman to move to the Newcastle United as the Turkish champions need Babel for this season.

The Turkish side are in this season’s Champions League group stages, and couldn’t afford to sell a key player to Newcastle United.

It’s not been reported if Newcastle United will go back in for Babel when the transfer window opens in January, and much will depend on how their season goes until the new year.