A couple of days ago, the idea that AS Roma could make a move for Pierre-Emile Højbjerg appeared, with the belief the arrival of Rodrigo Bentancur would potentially harm the Dane’s chances under Antonio Conte at Tottenham.

It seemed like a long shot, especially since the player has featured regularly with the Italian so far this season, but it’s not gone away.

Corriere della Sera’s Rome edition on Tuesday bring it back, with it said the Dane ‘could end up on the market’, as he played ‘very well’ under José Mourinho at Tottenham.

It helps that the Portuguese ‘values him’ and that Højbjerg himself has said he felt at his most comfortable under the Special One, but Antonio Conte being at the helm has changed matters a bit. 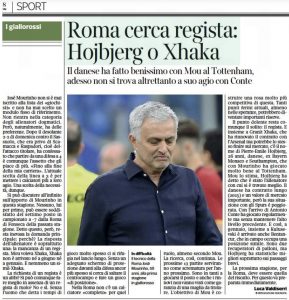 While he has ‘played regularly’, he hasn’t done so at the same level, meaning there could be an opening for AS Roma in the near future, even if he has a ‘long contract and an important value’ on the market.

One to keep an eye on, because if it doesn’t go away, perhaps there might well and truly be something in this.

Club ‘convinced’ Chelsea will soon make a move for player –...