Over the last few days, the Catalan media have repeatedly reported that Frenkie de Jong is edging closer to signing for Manchester United.

It’s explained the midfielder has gone from a stance of insisting he wants to remain at Barcelona, at the start of the international break, to being more cautious when talking about his future.

This stance is encouraged by the player sitting on the fence a little, and smiling, when asked about a potential move by the Dutch media. Should the belief be correct then a transfer shouldn’t be too hard to complete over the coming week or so.

Monday’s edition of Mundo Deportivo explains Barcelona’s stance remains the same. The club have ‘no doubt’ about the quality De Jong has, but they need the money and have multiple options in midfield. 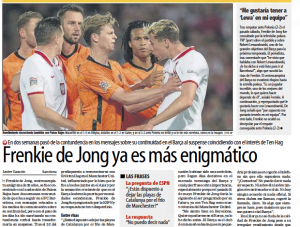 De Jong is a player they will sell, and Manchester United’s interest can facilitate the move quickly.

Sport also cover the situation, and say the transfer can become a ‘fact’ for €60m plus a further €20m in bonus payments, which sounds like a reasonable deal for everyone involved.