Despite currently being injured, Henrikh Mkhitaryan has left enough of an impression during his early days at AS Roma that articles are being written about the Serie A side potentially making the move permanent down the line.

The original deal between Arsenal and the Italians doesn’t include an option to buy, so there’s no easy way for them to do it, but Corriere dello Sport’s Rome edition suggest potential negotiations between the two sides will be ‘less complicated’.

Their reasoning behind that is the fact the Armenia international’s contract at the Emirates only runs until 2021, meaning that once his loan in Italy comes to an end, he’ll only have one year left on it.

Furthermore, he isn’t getting any younger at 31, and Unai Emery seemingly has little interest in using him going forward (otherwise he wouldn’t have let him go), which helps Roma’s case.

Expected to return from a tear is his abductor muscle later this month, the playmaker has still managed to make four appearances for the Serie A side since his move took place on September 2nd, during which he has scored one goal and picked up one assist. 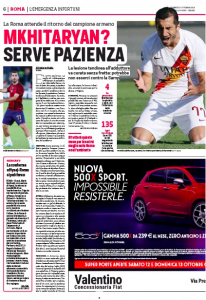 Prior to that he had featured in three of Arsenal’s first four games of the campaign, even starting the opening fixture against Newcastle, which ended in a 1-0 win.

However, a series of bench appearances after that set the tone for what was likely to come, leading to the decision to send him elsewhere to get more game time.