There’s a growing feeling in the Netherlands that Jurgen Klopp is downplaying Virgil van Dijk’s injury progress because he doesn’t want the defender representing the Dutch national team at this summer’s Euros.

Monday’s edition of De Telegraaf looks at the situation, and it’s stated there’s hope Van Dijk can ‘be fit sooner’ than the the impression the Liverpool manager has been giving recently.

De Telegraaf explains that whilst the Reds boss only publicly acknowledges Van Dijk can return for preseason, there’s Oranje belief of the defender being ready for the tournament.

Should there be a disagreement, it’s pointed out there’s no way the Premier League club can ban their player from taking part.

De Telegraaf state: ‘Klopp has put the brakes firmly o in England, but Van Dijk knows that the German coach cannot forbid him to travel to the Oranje training camp at the end of May or the beginning of June for the final round of the European championship. There is a good relationship between the player and Klopp and the Dutchman will not do ill-considered things.’ 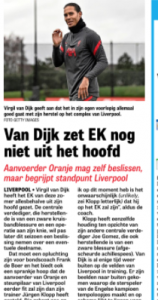 There’s no suggestion of a disagreement at this stage between the Liverpool player and manager, although it’s taken as certain that the club, if they could choose, would not want Van Dijk playing for the Netherlands having spent so long out with his knee injury.

The nightmare scenario for Liverpool would be Van Dijk returning to action too early and then having further problems when he returns to his club.