Home Europe Belief club ‘will eventually have to negotiate’ with Man United for player...
SHARE

Loaned to Milan without a purchase clause, Diogo Dalot is, as things stand, returning to Manchester United in the summer.

However, whether the Serie A side decide to make a separate move to try and keep him longer at San Siro is a very polarising matter in the Italian media.

Some believe Milan will simply send him back to Old Trafford and focus on other players going forward, while others, such as Corriere dello Sport on Friday, think there might still be a chance for him to stay put.

They believe that the Rossoneri ‘will eventually have to negotiate confirmation in the summer’, with the talks ideally being ‘based on reasonable figures and under new conditions’. 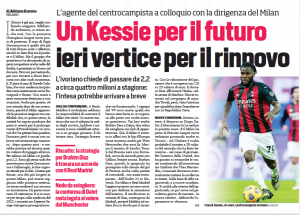 Much like they did late on in the transfer window to secure the loan deal in the first place, Milan ‘will go in search of the opportunity’, hopefully with a similar result come the end of the meeting with Ed Woodward and co.

Whether it’s on another loan or a permanent transfer, however, remains to be seen.